The XŌtaki College Alumni Trust was established five years ago by a group of former students to help the college with projects and scholarships that help current students to realise their goals and dreams, and to help build a 21st century college – it’s about students of the past helping those of the future.

The trust has undertaken projects worth about $300,000 in its brief existence (see table at right). Previously, these kinds of projects would have had to be funded through the college budget – meaning some would never have happened. They have allowed the college to invest in other important areas of education.

Some of the funding has come from generous organisations such as the Philipp Family Foundation, but a significant amount has been donated by former students who wish to “give something back” to the college of their youth. Several new scholarships have been created to help students with further study or opportunities to create a better future.

One of the innovative projects is to supply solar power. In two stages, solar panels have been installed on the college hall roof. More can be added. The energy savings to the college are reinvested in scholarships worth at least $3500 a year.

XŌtaki chair Max Lutz says the assistance of funders and former students has made a huge difference at the college, but there’s still plenty to do.

“We’ve made great progress in five years, but there are other projects we’d like to get off the ground,” he says. “If anyone can help, I’m always happy to talk to them. The reunion would be a great time to discuss it.” 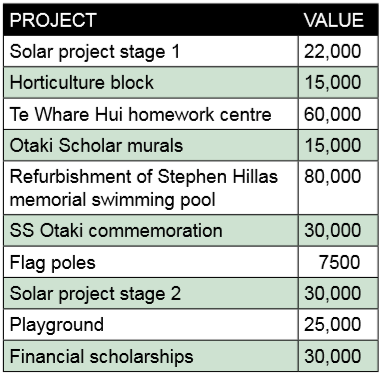 New projects for which the trust is hoping to raise funds include:

The trust also held its inaugural Hall of Fame event in 2018, which recognised former students Chris Parkin and David Pritchard. The next event will be in 2020 –  nominations can be made at the reunion and directly to XŌtaki through its website or Facebook page. The Hall of Fame is aimed at honouring former students who have achieved locally, nationally or internationally, and have contributed to Ōtaki College in some way.

+ Text Size -
Do NOT follow this link or you will be banned from the site! Original generation time 2.0910 seconds.