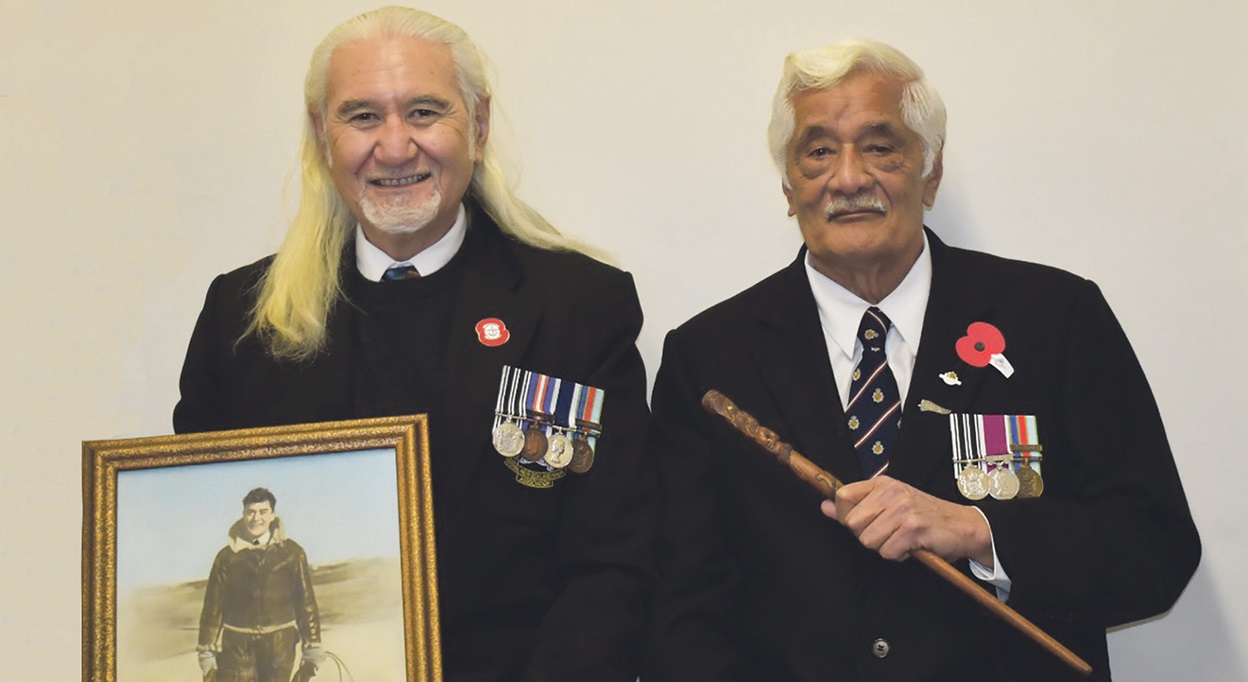 This story acknowledges that every item in the Ōtaki Museum collection has at least three associated stories to tell – of itself (its qualities and its origin), of the person (its owner/user), and of the relationship between person and object.

Walking alongside a shelving unit, in the museum’s collection store, I spotted, poking over the edge of the top shelf, the end of something. What I had found was a baton identified as a “swagger stick”[1] about 50cm long. The top half was carved, the bottom half tapered, but smooth.

Along with the stick, I had uncovered the saddest of stories.

Starting at the top is the tekoteko, representing ancient tribal ancestors who provide protection and guardianship for the iwi. They are often placed at the top of the wharenui; above the mahau (porch). The figure represented here is most likely Tūtānekai – representing Te Arawa, the iwi of his paternal grandmother.

This interpretation is reinforced by the carving of the pūtōrino (flute) – an instrument Tūtānekai played with great expertise – held in the fingers of the figure. This aspect also identifies the swagger stick as an item made for personal use.

The final element is the representation of a mokomoko (lizard). In te ao Māori, mokomoko represent several things; in this case a kaitiaki (guardian) and as a reflection of the undoubted talent of Kingi Tahiwi.

Kingi Tahiwi was born on November 17, 1914, in Ōtaki. After schooling at Wellington College, he attended Victoria University from 1932-38, He was an active and popular student, and in 1935 he won the university’s prestigious Plunket Medal oratory contest.

Two years later, he joined the newly formed National Commercial Broadcasting Service as one of its first Māori announcers, going on air with 2ZB Wellington, which began broadcasting on April 28, 1937.

He was a regular host on a session “aimed at female listeners and his smooth on-air technique and good looks quickly made him a favourite”.[1]

On February 6, 1940, he was one of the announcers who broadcast nationwide the celebrations at Waitangi to mark the centenary of the signing of the Treaty.

On March 23, 1941, five months after marrying Gretchen Ryan in Wellington, he enlisted in the Royal New Zealand Air Force (RNZAF) in Levin, taking the first steps of a journey that would end tragically just 18 months later.

On  July 26, 1941, Kingi qualified as a pilot; on September 14 he sailed from New Zealand to England; from October 14 to July 30, 1942, he was in the United Kingdom with a variety of units. While there, he participated in a radio programme Calling New Zealand (see footnote).

On August 2, 1942, Kingi arrived in Egypt flying a Bristol Beaufort torpedo bomber; on August 21 he joined No 203 (RAF) Squadron, based in Alexandria, Egypt.

Wednesday, September 30, was the final step, when he and his crew of three flew out over the Mediterranean Sea in their Martin Baltimore light bomber to carry out reconnaissance on an Italian convoy sighted steaming to the west of Crete. It was Kingi Tahiwi’s sixth operational sortie, and it was to be his last. Aircraft and crew disappeared without a trace.

In a complex twist of fate, one of the crew, Sergeant Alan Glover, had also been born in Ōtaki. He was 23 when he died. The four men are commemorated on the Alamein Memorial at the El Alamein War Cemetery in Egypt.

Notwithstanding the explicitly personal nature of the swagger stick, and the strong kaitiaki representations, it did not accompany Kingi Tahiwi to war. After his death, it was found among his effects left behind in New Zealand.

A final thought: The Welsh poet Dylan Thomas said that life is but a flash of light between the womb and the tomb. In the case of Kingi Tahiwi, it was a great tragedy that his flash was not given the time to shine to the fullest brilliance that it would undoubtedly have reached.

[1] A swagger stick is a short stick or riding crop usually carried by a uniformed person as a symbol of authority.

[2] Notes to a recording of one Kingi’s shows  at Ngā Taonga Sound & Vision: Search  Kingi Tahiwi at ngataonga.org.nz