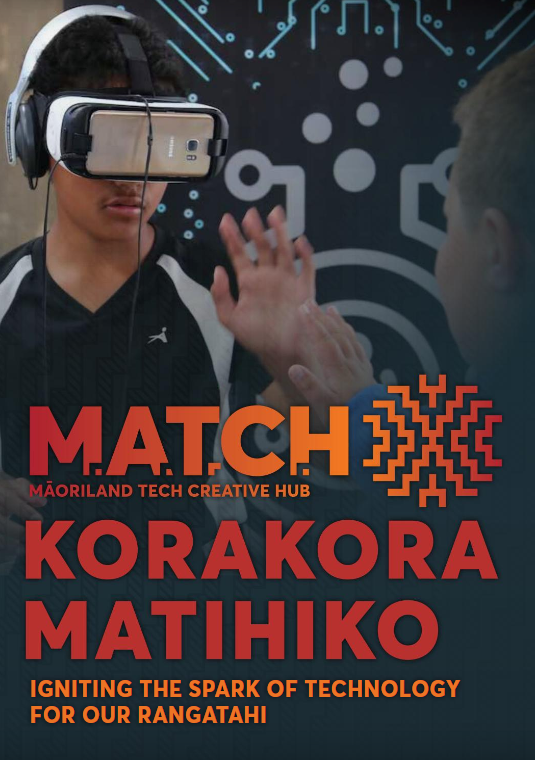 Ōtaki’s young people are about to learn creative technology skills that could take them into the careers of the future.

The Māoriland Tech Creative Hub (M.A.T.C.H)  is to be launched at the Māoriland Hub in Main Street on Friday (May 17). It is part of a two-week expo, Korakora Matihiko, which showcases indigenous games, animation, VR&360 (virtual reality), comics and public kōrero.

M.A.T.C.H will be the first Māori-led tech hub for rangatahi (young people) on the Kāpiti Coast. Running weekly after school at the Māoriland Hub, it was created from the new Ministry of Education digital curriculum, Hangarau Matihiko, which teaches youngsters how technology works, and how they can use that knowledge to solve problems.

From term 1 next year, all schools in the country are expected to be teaching Hangarau Matihiko. Its aims are to ensure that rangatahi are able to adapt to and understand technology as it innovates so they are creators, not just users.

“Once the new curriculum is introduced, our kids won’t just be using devices such as computers and smart phones, but also learning the computer science principles that all digital technologies are built on,” says Måoriland Charitable Trust director Libby Hakaraia. “We believe our rangatahi here in Ōtaki have a lot to offer the  creative and digital innovation sector that is expanding rapidly. M.A.T.C.H is about supporting rangatahi with experiences and opportunities, and a pathway to the  creative and digital innovation sector.”

The tech creative sector is one of the fastest growing industries in the world, creating thousands of new jobs in rural and under-resourced communities.

Libby says the Māoriland Charitable Trust has created M.A.T.C.H so rangatahi can be leaders in this industry, both at home in Ōtaki and on the world stage.

filmmaker Gabo Arora of New York and representatives of INDIGI

Heralded by the LA Times as “game-changing” and “transcending all the typical barriers of rectangular cinema”, Gabo‘s widely acclaimed virtual reality documentaries have all premiered as official selections at major film festivals around the world. He is also a professor at Johns Hopkins University where he designed, leads and is the founding director of the new Immersive Storytelling and Emerging Technologies (Iset) programme and lab.

He was formerly a senior economic policy advisor to United Nations Secretary-General Ban Ki-moon; a UN diplomat with extensive field experience in disaster and conflict zones; and the UN’s first-ever creative director, founding UNVR, a division of the UN focused on virtual reality initiatives and campaigns.

He has championed the potential of VR to make social change. His VR film, Clouds Over Sidra, in partnership with Unicef, has doubled the number of donations to support Syrian refugees.

+ Text Size -
Do NOT follow this link or you will be banned from the site! Original generation time 2.3244 seconds. Cache Loaded in: 0.0443 seconds.