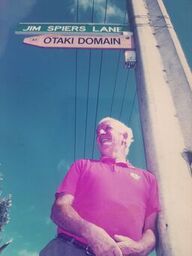 James Spiers, or Jim as he was better known, was a huge supporter of Rāhui Rugby Club, always giving generously of his time and money to help out, and to improve the club and its facilities.

He died on September 22, drawing tributes from the wider rugby fraternity.

Jim was the only son of Karori (Kori) and Muriel (Tootie) Spiers. He was born in Ōtaki on September 25, 1927, a year after sister Gwen, and exactly two years to the day before Hazel, followed by Judy in 1934.

Kori, a First World War soldier, bought a farm in Te Waka Road, Te Horo, after the war. Jim loved working with his parents and no one could imagine him doing anything but be a farmer. He preferred the farm work to sitting in the classroom at Horowhenua College, so when he left school he didn’t need to apply for a job; he had one at home.

After his father died, Jim lived with his Mum and cared for her at the farm, and then, when she craved a little more contact with other people, they moved to Ōtaki.

In the early days Jim and his sisters would take Tootie to the regular dances in the local community halls. These were among the social highlights of the time and the Spiers family really enjoyed them.

The tennis club was a hub of the social scene, too, with Jim playing tennis and badminton.

He was a bit embarrassed when Jim Spiers Lane – leading from Mill Road to Rāhui’s home ground at the Domain – was officially named. He told his family he thought that sort of thing happened only when people died.

Jim had three families: his natural family of Gwen, Hazel and Judy, and his many nieces and nephews; his farm family the Sweetmans; and of course his rugby family of Rāhui Rugby Club and the Horowhenua-Kāpiti Rugby Football Union.

He loved his sisters (all strong, outspoken women) and applied passive resistance to their attempts to clean or tidy him up. He also showed a keen interest in his 13 nieces and nephews, their children and grandchildren.

Hazel, who also grew up at Te Horo, spoke at the celebration of his life of the older brother she shared a birthday with (along with three other family members) which was exactly nine months after Christmas Day! She mentioned the dances they attended in the Te Horo Community Hall and his happy places – working on the farm, with his family or at the rugby.

Niece Pru and nephews Dave and Kevin spoke of the uncle they and their brothers and sisters spent many school holidays with on the farm. He taught many of them to drive, instilled in them a strong work ethic and showed those city kids the ways of the country – including haymaking, clearing thistles and dock leaves from paddocks, drinking warm milk straight from the cow and driving the tractor.

He took on Margaret and Doug Sweetman as sharemilkers on the farm, and probably neither party fully realised how close they would become. The Sweetmans remember Jim as a friend, adopted granddad to their boys and someone who had been in their lives for more than 35 years. The three boys (now men), Tama, Nathan and Marcus, honoured Jim with a rousing haka as he took one last drive around the farm.

Rāhui president Rex Kerr and Horowhenua-Kāpiti CEO Corey Kennett also paid tribute to Jim, a stalwart of rugby in the region for 70+ years.  Life membership of the HKRFU is significant, and Jim is one of a small group to have the honour bestowed on him.

+ Text Size -
Do NOT follow this link or you will be banned from the site! Original generation time 2.5106 seconds. Cache Loaded in: 0.0604 seconds.