Most people naturally see themselves as ordinary and not particularly special. No doubt the citizens of any town or city also see their place in similar light.

So it’s little wonder that most people, and most towns, achieve little of note.

It makes me think of a quirky thing from childhood. It was a recited response to the question, “where do you live?” My answer was, “13 Te Manuao Road, Waitohu, Ōtaki, North Island, New Zealand, southern hemisphere, world, solar system, galaxy, universe, infinite space”. Other kids often had the same kind of answer, depending on the street address, and so on.

As a kid growing up in a small town, while attempting to comprehend the mysteries of the world beyond, it seemed a fun way to locate oneself in the context of an unknown world – starting with a familiar family home and street, and extending to a dimension that seemed to have no boundaries.

In the world we inhabit today, our sense of where we belong and of “community” is probably as strong as ever. But it’s obvious that many people are challenged by feelings that their sense of place is threatened as the known world shrinks and so much is cast in global, rather than local, community terms.

In many countries the neoliberal and globalist avalanche is leading to feelings of helplessness and fear, with populist politicians cashing in with isolationist ideals and the notion that stronger local communities should be inward looking, resistant to change, and take an exceptionalist view of their own culture while disparaging other cultures, religions and ethnic groups. Witness the Trump mantra “Make America Great Again”, the many anti-migration movements around the world and, to some extent, the UK’s Brexit withdrawal from the EU.

While in many respects these things are an understandable response to unprecedented change and threats, those who promulgate such ideas seem to forget what so often made their communities rich places in the first place – cultural understanding and acceptance, seeking out positive change and embracing connectivity, knowledge and education as essential pillars of a community.

In the simple madness of isolationist thinking, “other people” are to blame for everything. For example, white supremacists in the United States rant at native Americans that they should “go back to where they came from”. Huh?

Of course, no community is perfect. A town such as Ōtaki suffered, like many others, from colonial arrogance and duplicity so that cultural and religious acceptance worked largely as a one-way street. But in the 21st century, progress to better harmony and sense of community is not a backward step.

Having noted all this, it is not a contradiction to say that a sense of belonging and ties to a local community are essential for citizen well-being and social cohesion. And that, in our culturally diverse world, means different things to different people. For example, it is not wrong for Māori to see their whānau, hapū and marae as the centre of their universe and worldview, just as Somali migrants living in Wellington see themselves at the centre of their culturally rich universe.

Each community is strengthened by the things that bind us together, while accepting and celebrating those who might not share the same cultural or religious beliefs. 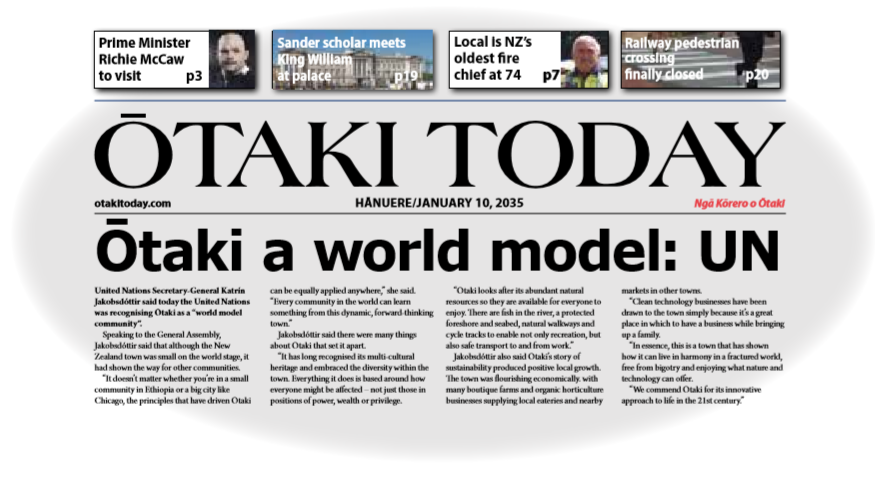 As citizens of communities, we all have the potential to flourish, individually, but most importantly, collectively. We can look and experience the natural world we inhabit and gain insights into our human condition through an appreciation and understanding of arts, culture and humanities.

We are all the beneficiaries of billions of years of life and culture, and of DNA recycling itself to hand us a responsibility to add our own few nanoseconds of richness and progress. Central to this is a very human ability to communicate with empathy, connect resources with areas of need and to show respect and acceptance to others.

So, here’s an idea. If Ōtaki is the centre of the universe (for its citizens), why couldn’t that be a catalyst for the kind of progress the whole world desperately needs. A small town can systematically look to all the best things in the world and adopt them and feed off them for the betterment of the community. But more importantly, Ōtaki has a strong community spirit, access to indigenous history, culture and knowledge, and plentiful educational resources.

Put this together with wayfinding vision and leadership, and an ambition that says Otaki could be a model community for the world, and anything is possible.