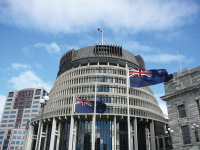 News of leaked emails and dissention among National MPs before the election is a clear sign at least some in the party thought they had a dog’s show of winning.

Leader Judith Collins was apparently making policy up on the hoof and not sharing internal polling data with her MPs. That suggests a lack of trust in her own whānau, based on the jarring self-knowledge that many National MPs didn’t regard her as particularly loyal to the leadership in the past.

For any political party this seems odd and self-destructive behaviour. Why would the geese vote for an early Christmas when a bit of grit-the-teeth bonhomie is surely called for?

The answer is that it is an entirely consistent reaction in party politics when things are falling apart.

The life of a politician, under MMP, depends on the strength of the party vote. When that’s going well, MPs have a pay cheque and maybe a crack at owning the Beehive. This is when the party looks united behind a confident leader and is on message, at least looking in from the outside. If things become grim, it’s suddenly everyone for themselves and a scramble to position for the next surge of support, inevitably behind a new leader.

But before anyone says it all points to narcissistic behaviour and the reason politicians can never be trusted, the very nature of democracy requires this Darwinian renewal for the species to survive and to fight another day.

As we have seen in the collapsed case of Trump’s America, narcissism is always a possibility, but in New Zealand we’re lucky in that our democracy and political culture is strong enough to endure – at least so far.

I saw a first-hand example of our political culture when, as a communications advisor, I sat in an election campaign meeting in 1993 with Labour leader Mike Moore where he canvassed views on handling an upcoming TV debate with Jim Bolger. I particularly recollect Moore’s reply to a suggestion that “we could dig some dirt on the prime minister to damage the National campaign”.

Keep in mind that Mike Moore was as driven and single-minded about winning as any politician one might encounter, and Bolger stood in the way of him achieving his life’s ambition. Yet his answer speaks volumes about not just Moore, but also the nature of politics in this country.

He sternly responded: “I would never entertain such an idea. Jim Bolger is a decent man and while I oppose his politics, he has my respect.”

As a novice at the time, in the real workings of a political campaign, I was fascinated by the tribalism that is amplified during an election. The only parallel I could think of was the culture of a crime family, and I mean the “family” bit rather than “crime”.

In politics, as in a crime family, the leader is the centre of all things. But their position is assured only as long as things are going well. If that’s not the case, the biggest threat to the leader is from a bullet in the night from inside the family, not from a rival family. In fact, the rival family might be plugging for the leader’s continued survival.

If Jacinda Ardern was running at a 10 percent approval rating right now, National would be wishing her well and she’d be nervously avoiding turning her back to fellow travellers.