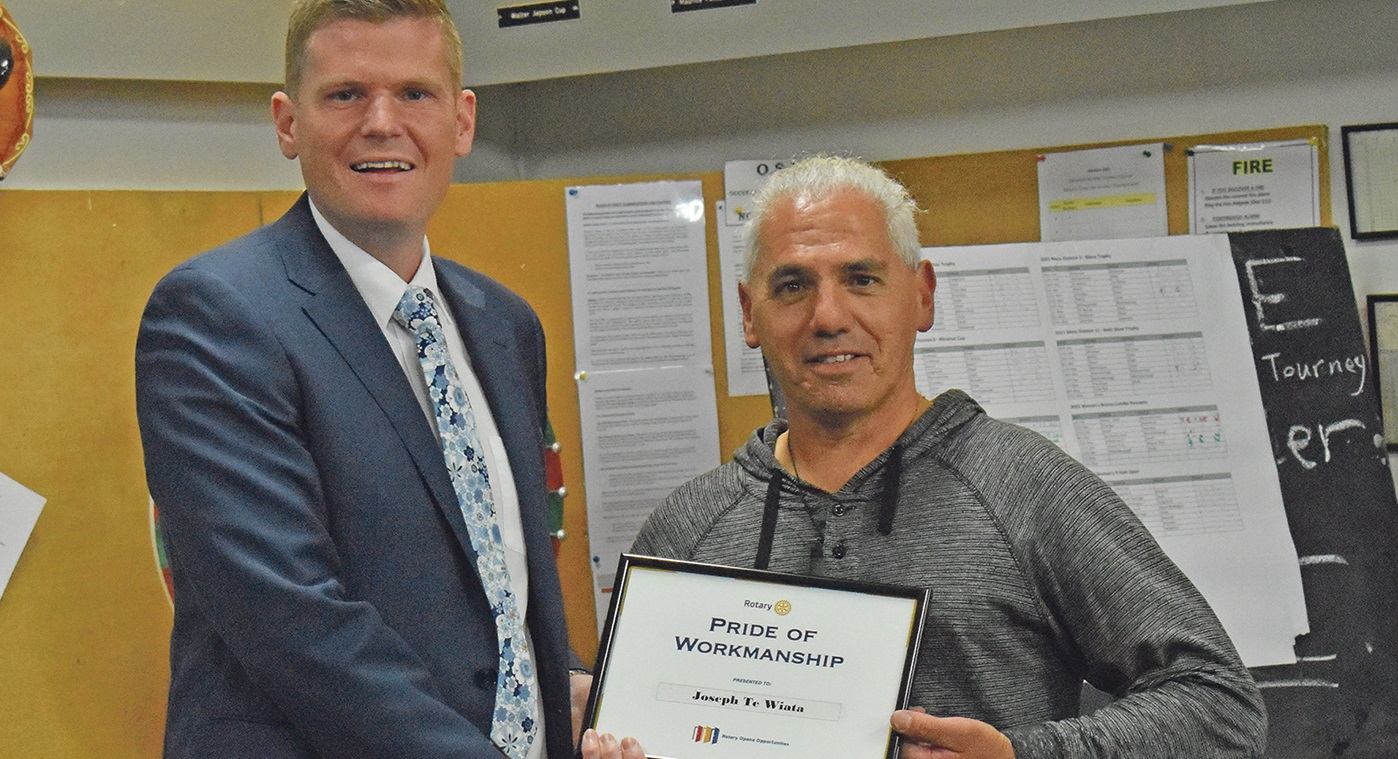 The efforts of Joseph Te Wiata at New World Ōtaki as he calmly helped shoppers during last year’s Covid-19 lockdown were recognised at the Rotary Clubs of Kāpiti/Horowhenua’s annual Pride of Workmanship awards.

Joseph was one of five district recipients of the awards at Ōtaki Golf Club on April 29, which also included Roger and Sarah Beech-Pooley of New World. Ōtaki’s Michael Fagg received a special award for his many years of service to Rotary.

The citation from New World said that during the 2020 lockdown, the Body & Soul gym that Joseph owns had to be closed, so he took on the role of the supermarket’s “doorman.” He organised the line of shoppers, ensured physical distancing, sanitised the trolleys and ensured the measures were understood by customers.

“New World considered that Joseph went above and beyond the requirements and approached the role with enthusiasm, kindness and a friendly disposition,” the citation said. “Having someone of Joseph’s Mana and personality on the front door during Covid took the stress out of shopping for our customers.

“This was important to us as we were worried enough without having the shopping experience being too stressful . . . We were very lucky both as a store and as a community to have someone like Joseph helping us through Covid.”

Roger and Sarah Beech-Pooley – New World owner Steven Cole’s “right-hand man” and food and health safety manager respectively – received awards (though not present to accept them) for what Steven said was going above and beyond what’s expected of them.

“They have great skill and understanding of our business and both give 110 percent to the store in supporting my team all the time,” Steven said. “On top of that they both give a lot to the community they are in. Roger was a Scout leader for many years in Ōtaki and they both do a lot at their local school, spending time organising the fair and give of themselves to our community generally.”

Michael Fagg had been for three years assistant governor of the Rotary clubs in the Kāpiti and Horowhenua region. His special award recognised his positive contribution, commitment and leadership.

His wife, Heather, was included in the recognition as she had worked tirelessly behind the scenes with Michael.

The awards honour people in the workforce who sometimes get overlooked but provide exceptional service or commitment at work.