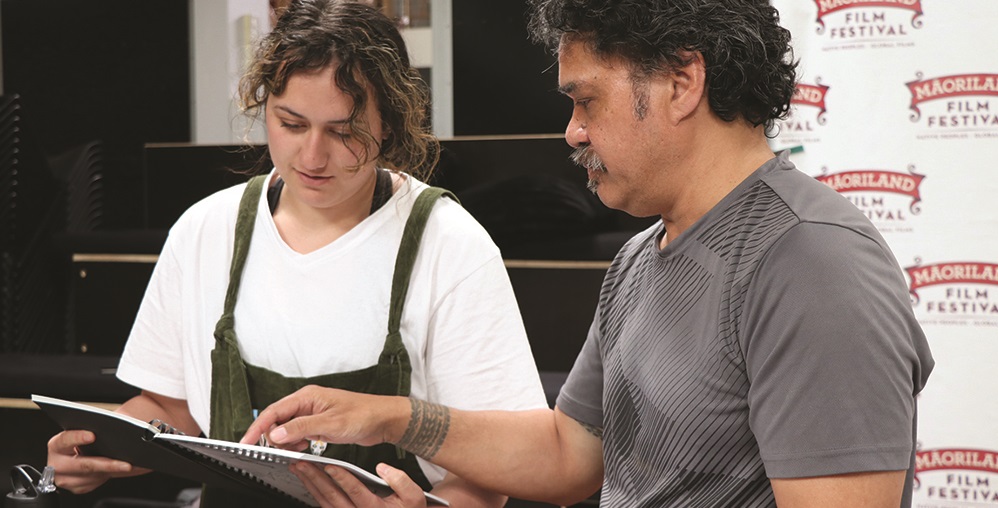 Eight local rangatahi now have jobs at Māoriland after graduating in late November from a six-week course that took them behind the scenes of New Zealand’s top special effects and animation companies.

The first graduates from the Māoriland Tech Creative Hub (MATCH) also received one-on-one mentoring from some of the country’s top tech artists.

As part of their course they presented their own projects on graduation night to a room filled with whānau, friends and some of the MATCH industry partners. Each of the graduates shared their animation work that included a dance video, 2D animation, graphic design, a pitch for an animation series and more.

MATCH manager J T (Jared Tuoro), who has a background as development manager for New Zealand Rugby, was responsible for getting all of the rangatahi through the course.

“When I took the job I knew very little about the creative industry,” he says. “I had an old brick phone! But I do know the importance of creating a team to overcome challenges.

“I watched these rangatahi climb a very steep maunga, but they did it with 100 percent attendance and completion. And wow! The work they created and the talent they have is hugely exciting.”

The MATCH team had two days in Wellington visiting  parts of Weta Digital and Weta Workshop that not many people get to see. This included trying out the motion capture technology used now in many productions including the Avatar films.

Weta Digital’s executive VFX producer, David Conley, who has films such as The Jungle Book, Avengers: Infinity War, Pirates of The Caribbean, and Life of Pi among his credits, shared his story with the students. He came from an underprivileged background growing up in America’s west to being one of the top creatives in the world.

He told the rangatahi to dream big and to believe in their dreams.

These were messages shared by many of the top creatives who came to MATCH to share their stories, including Jessica Hansell, creator of animated series Aroha Bridge; musician and creative Tokerau Wilson; sketchologist Meg Melvin; and Munro Te Whata, illustrator of the Māori Hare Pota.

Also sharing his story was one of the world’s best concept artists, Gus Hunter.

Gus grew up in Porirua and was one of the first employees of the then small Weta Workshop about 18 years ago. His visual images were in Lord of the Rings and King Kong, and he has worked on all of the Weta films, creating extraordinary concept art that has enabled them to be brought to life.

The first of the MATCH Animation Intensifier graduates will work at Māoriland for the next three months before transitioning into the creative industry.

The next intake for MATCH will be in late January.