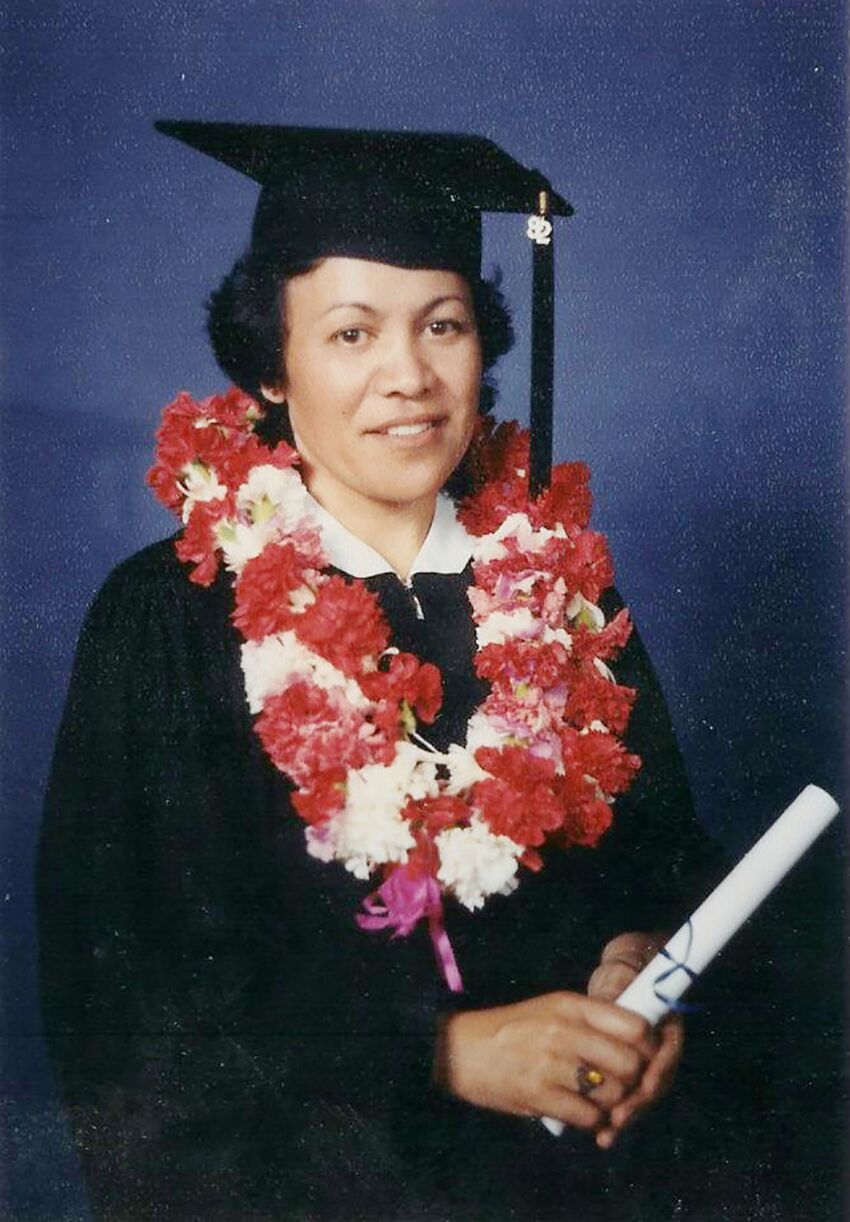 Mum was the youngest girl of her many siblings, thus giving her the name she was most affectionately known as: “Babe or Aunty Babe”.

Mum’s dad was a Wehipeihana of Kuku, while her mother was a MacDonald from the Wairau (Blenheim). She enjoyed a beautiful childhood growing up in Kuku, where everyone enjoyed the spoils of having whanau everywhere.

In her teenage years, Mum had the privilege of attending Hukarere (a Māori girls school) up in Napier. Education became Mum’s forte, so she was to attend teachers college to become a teacher.

Over the years she continued her own “learning” and by studying at Massey University. Later, she met our dad, an Austrian by the name of Leo Poetsch, (who became a very successful builder in his own right). It was at this point that they moved and settled in Ōtaki.

Over the years Mum taught predominantly at Ōtaki School as well as Ōtaki College. While teaching at college she was actively involved in many activities, including netball and gymnastics as a coach as well as kapa haka. Mum took a liking to squash so was also very involved with the Ōtaki squash club.

In the early 1980s, Mum took leave from teaching, so we moved to Hawaii to look after her newest grandchild, while my sister, Marisa, continued her studies. It was here that Mum decided to further her studies and on June 19, 1982, she graduated with a bachelor of arts from Brigham Young University.

A few more years went by before we returned back to New Zealand and Ōtaki. Mum resumed teaching in a relieving role at Levin Intermediate School, and Mum and Dad moved to Levin.

Mum also taught for a time out at Kohitere before some more relieving work at Waiopehu College.

For a time she also taught up at Hamilton Girls’ College, where she would commute weekly.

For many years before her “retirement”, Mum taught at the Central Institute of Technology (CIT)  campuses in both Trentham and Wellington.

Mum was a very staunch member of The Church of Jesus Christ of Latter Day Saints and held many positions, including organ/piano player and teaching roles.

Mum was very proud to be of Ngāti Tukorehe descent and was always active at the marae. She was on the marae committee for many years.

Our Mum loved people and it wasn’t uncommon for her to strike up a conversation with a complete stranger. She continued to be active and conscious of her health, often walking up town or swimming multiple laps at the local pools.

Unfortunately Mum suffered a life-changing stroke four years ago and even though she put on a happy face, we knew this wasn’t our Mum. She could no longer do the things she enjoyed most.

Our beautiful Mum took her final breath on August 13, 2019. We will love you for a lifetime, Mum. #FAMILIES ARE FOREVER

+ Text Size -
Do NOT follow this link or you will be banned from the site! Original generation time 2.2043 seconds.